Deprecated: The each() function is deprecated. This message will be suppressed on further calls in /home/customer/www/omraamwiki.org/public_html/includes/MagicWordArray.php on line 197
 Song Blagosloven Gospod Bog Nach - OmraamWiki

« The universe is a hierarchy; at the top of this hierarchy reigns a Being who is all love and who has distributed everything so that no creature shall lack anything. It is now up to us to seek to reach these spiritual regions with our thoughts: we will capture all the elements that our heart and soul need there »[1]
« The goal of spiritual work is identification with the Divinity... We are part of the Lord, only He exists and we are a projection of Him... By consciously binding himself to Him, the disciple comes close to Him until one day he becomes a creator like Him... »[2] 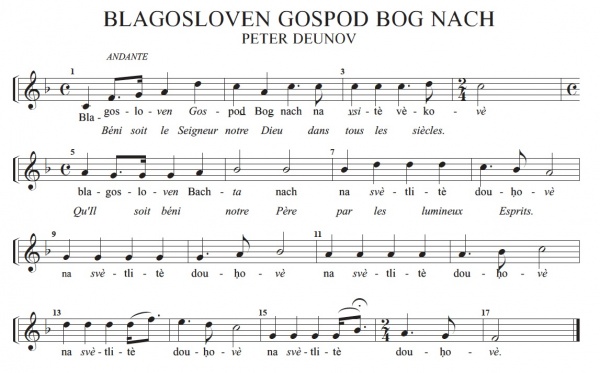 Explanations of the Song[3]

Blagosloven Gospod Bog Nach's original arrangement was written for soloist and choir on a harmonization by Andrée Métraux. It is from this version on which we rely to support the words of this article.

« The disciples of Master Peter Deunov have never forgotten the emotion of the days of the meeting, when at dawn, five hundred brothers and sisters, gathered in regular rows, sang in chorus this song which broke through the space like an immense wave »[4]

This comment by the Master refers to the words of the song and the magnificent hope that he himself lived by singing it. Indeed, Blagosloven carries the message that the identification between human brotherhood and the Great White Universal Brotherhood in Heaven is possible! Therefore, the "immense wave" which was breaking in space was greatly amplified in the invisible world by the Communion of Saints and all the Angelic Hierarchies singing the Glory of God together with the disciples!

Theme: The Celebration of the Luminous Spirits and Human Collaboration with the Angelic World

Blagosloven Gospod Bog Nach projects us into the world of the Luminous Spirits and the splendour of their work of celebration in the service of God. Blessing the Lord tirelessly, the Angelic beings work for the realisation of the plans of the divine world and Blagosloven Gospod Bog Nach lavishes hope to humans that they too, thanks to the purity of their hearts, can collaborate harmoniously with the spiritual world to build a world of brotherhood on Earth.

Symbolic role of the main melody and the accompaniment

The main melody by a soloist

The main melody, performed by a soloist, symbolically represents the song of the Seraphim. The Seraphim proclaim that all luminous Spirits bless the Creator in perpetuity and are accompanied by all the angelic orders in consciousness of Unity and Divine Perfection.

«The Seraphim are the angels of the Sephira Kether, the first Sephira in the Tree of Life, the Sephirotic Tree. Therefore, they are the first ones who receive the divine emanations. They drink from the source of light, from the source of love and day and night they repeat: "Holy, Holy, Holy is the Lord God, the Almighty". They nourish themselves by contemplating the Lord. The Seraphim are the perfect manifestation of love ».[5]

The accompaniment that the choir does

The four mixed voices harmonization, interpreted by the whole choir, is thus the accompaniment of this group of luminous Spirits who in their own way bless God. To this angelic choir are added the evolved human beings who have travelled the path of evolution and who inhabit the Sephira Malkhut. Together they form the brotherhood of the Ishims or Perfect Men, a very powerful community of love, called by the Initiatic Science: the living chain of the Great Universal White Brotherhood. In his lectures, Master Omraam Mikhaël Aïvanhov explains the journey that he himself travelled to join this celestial choir, whose sublime and eternal music was named by Plato "the Harmony of the Spheres".

Through the distribution of voices between the soloist and the choir, Blagosloven Gospod Bog Nach prefigures the victory of humanity in the accomplishment of its ideal: to resemble God and collaborate with the angelic hierarchies! Blagosloven Gospod Bog Nach participates in giving glory to the Lord and nourishes the certainty that all human beings will one day become capable of living this state in consciousness!

Reader's note: the writing of this entry is temporary and limited to only a starting point, since the topic is examined by Omraam Mikhael Aïvanhov in the contest of thousands of conferences he held between 1938 and 1985. The researcher will find important aspects of further interest by reading or listening directly to his lectures, published by the publisher Prosveta, the sole and exclusive owner of the rights to his work. Therefore, this artcile does not fully and comprehensively describe Aïvanhov's thought on the subject matter.

OmraamWiki is an international project realized with the contribution of the Scientific Research funds of the University for Foreigners of Perugia (Department of Human and Social Sciences)
Retrieved from "http://en.omraamwiki.org/index.php?title=Song_Blagosloven_Gospod_Bog_Nach&oldid=300"