Deprecated: The each() function is deprecated. This message will be suppressed on further calls in /home/customer/www/omraamwiki.org/public_html/includes/MagicWordArray.php on line 197
 Song Pravda - OmraamWiki

«Any one of you may be the victim of an injustice at some time or other. So, if that happens, first of all say to yourself, "This is temporary. It will pass." Bear the situation with patience, humility and love, and one day you will come out of it victorious. Even the best people can be victims of injustices, but if they continue to walk along the path of light in spite of all the obstacles they encounter, heaven and earth have vowed to give them what they deserve; this is an absolute law.»[1] 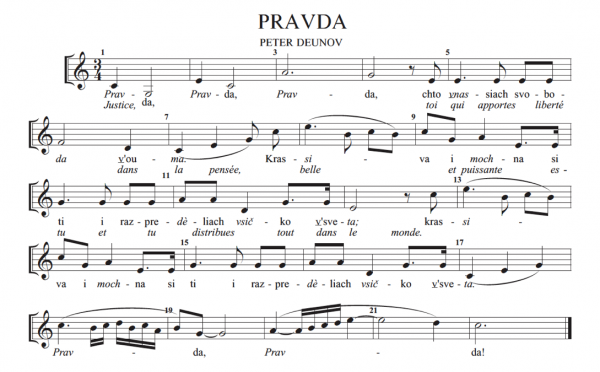 Explanations of the Song[2]

Pravda was first given by Master Peter Deunov on April 15, 1943,[3] one year before his departure from the earth. This song is a vision of Divine Justice that would eventually intervene as a result of events that were already taking place in Bulgaria after the entry of German forces into the country in March 1941, in the midst of the Second World War? Perhaps Pravda is a proclamation of the unalterable greatness of the Divine Justice that governs everything in the universe and from which humanity cannot escape.

Theme: The benefits of Divine Justice

In Pravda, the human soul addresses the Virtue of Divine Justice in order to pay homage to it, for this Justice carries within it the power to liberate our thinking. It also enables us to see things through the prism of truth and not in a way that is distorted by the limitations of our consciousness. Indeed, we will see the right reality of things if our thinking is a liberated and just thinking. Unlike human justice, which only looks at faults committed on the physical and material plane, Divine Justice also examines thoughts, feelings and intentions.[4]

The melodic structure made visual

Measures 1 to 4 : Stability and Rigor

Pravda is linked to stability, rigour and depth. The tonality of C Major gives the chant a very strong foundation. The song begins with the name Pravda (Justice) being chanted three times, and this proclamation is pronounced in the lower register of the voice. The atmosphere is calm, noble and majestic.

In the face of this divine power of Justice (Pravda), we feel very clearly that only the true in us can stand before it! Pravda is an infallible judge who endorses only the truth. Its appearance may seem severe, even austere. In fact, its stability is immutable! Pravda conforms to the Truth and cannot tolerate being altered. On the other hand, its boundless generosity provides for the maintenance of the whole of Creation. Justice maintains the balance necessary for Life in the whole universe and intervenes at any time when an imbalance manifests itself in the world.

In an instant, the assertiveness of the proclamation is transformed into gentleness and reverence. In fact, the song evokes the benefits of this great Virtue. It brings freedom to our thinking, it is powerful, beautiful and distributes with equity! This is a part of the chant where the mood turns to prayer. Through this moment of appreciation, humility and gratitude, we commune with the Spirit of Divine Justice, the Justice of Christ's Love.

Following this moment of recollection, the song matures and develops in a glorious and eloquent manner until the end. Beauty (Krassiv) and Power (Mochna) are the attributes of Virtue and they blossom in a harmonious and complementary way. The combination of these forces contributes to the equitable distribution of "everything" in the universe. Indeed, we understand that Justice goes far beyond the principles of human justice and the law of retaliation. Pravda represents the justice of Christ, a justice that advocates forgiveness, responsibility and magnanimity. It is the justice of love, a powerful, intelligent, free and beautiful justice!

« There is one justice, and there are two injustices. You don’t believe me? Well, let me explain. When you go to the greengrocers to buy a kilo of cherries, he can give you exactly a kilo… or a little less… or a little more. In the first instance he is being just, and in the other two he is being unjust, but of course the second injustice is most welcome to his customers. They wish everyone were as unjust as this good man, whereas the first injustice does not please them at all. So you see, we have one justice and two injustices. People are always advised to be just. Well, on the contrary, I am going to advise you to be unjust, in other words to learn to work with love. Yes, love is the greatest injustice there is! »[5]

Works by O. M. Aïvanhov about the topic treated

Reader's note: the writing of this entry is temporary and limited to only a starting point, since the topic is examined by Omraam Mikhael Aïvanhov in the contest of thousands of conferences he held between 1938 and 1985. The researcher will find important aspects of further interest by reading or listening directly to his lectures, published by the publisher Prosveta, the sole and exclusive owner of the rights to his work. Therefore, this article does not fully and comprehensively describe Aïvanhov's thought on the subject matter.

OmraamWiki is an international project realized with the contribution of the Scientific Research funds of the University for Foreigners of Perugia (Department of Human and Social Sciences)
Retrieved from "http://en.omraamwiki.org/index.php?title=Song_Pravda&oldid=349"