Deprecated: The each() function is deprecated. This message will be suppressed on further calls in /home/customer/www/omraamwiki.org/public_html/includes/MagicWordArray.php on line 197
 Song V’Natchalo Be Slovoto - OmraamWiki 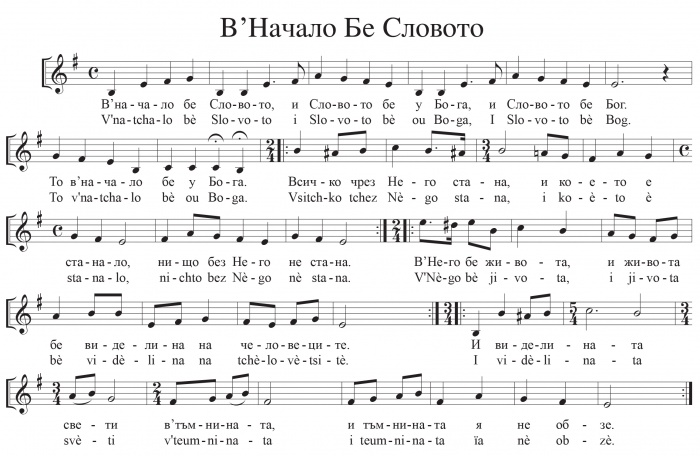 Explanations of the Song[2]

V’Natchalo Be Slovoto means « In the beginning was the Word ». This song takes up the words from the beginning of the Gospel of St. John and is one of the « prophetic » of Peter Deunov.

V’Natchalo Be Slovoto describes the aim of the human soul and its high ideal: to merge with God or its Higher Self. It calls us to contemplate the grandiose creation of the divine Word and to celebrate its beauty. Also called by Peter Deunov « Music of Love », V’Natchalo Be Slovoto leads us to understand how close God is to His creation and how He cares for it.

Development of the Song

Here is what Peter Deunov said about the energy pattern of the song :

The different stages of the song can be heard through the musical nuances of each of its parts. In order to perceive the structure of the song more easily, we advise you to watch the video showing the indications of the stages in the score.

Here is the structure of the song in more detail :

At the beginning of the song, the melody entrusted to the bass is ascending. The bass represents the activity of the Spirit and it expresses itself as an awakening of consciousness:  : « I, a spark of the Spirit, want to know the truth ». At the same time, the sopranos, symbolic of the voice of the soul, in a descending melodic movement, stimulate the being to question himself about the mysteries of life and the Word. We are in an intimate, deep atmosphere, conducive to the awakening of consciousness. Symbolically, the sun rises.

Verse 3 is connected to the activity of the intelligence

« All things were made by Him (the Word), and nothing that was made was made without Him. »

Thanks to the contribution of intelligence, the light of the Word has the possibility to manifest and propagate. LThe activity of intelligence is a manifestation of the spirit that is externalized. Musically, the sopranos speak and express this manifestation with force. The singing is more animated, it ignites and unfolds… We are in an atmosphere of opening, exteriorization and expansion. Symbolically, everything is illuminated.

Verse 4 is connected to the activity of the heart

The life of the spirit has manifested itself in the light of intelligence. Now it must pass through the warmth of the heart. The spiritual heart is the energy organ that receives the light that has become love and directs it into matter. Recognizing the light of spirit, the heart will work to spread it by emanating love. Musically, it is the most animated and grandiose part of the song! It is the moment of the victory of light over darkness. The human being, after all his efforts, feels an immense joy and experiences a state of grace.

Peter Deunov also adds this in his commentary on the song :

« In the morning, as soon as he wakes up, the disciple can read this verse, sing it and meditate on it until the light comes into his mind: this great idea will change his way of thinking, his heart will be filled with love, and he will know how to act correctly in matter.  »

We are in an atmosphere of action, in recognition of God, that is limitless. Symbolically, it is the victory of the forces of life.

Verse 5 is connected to the material world

In this last verse, the bass resumes the speech and makes us hear the effort of the soul following the revelation of the Spirit. However, this revelation cannot penetrate the darkness, represented by the human unconscious. As long as the consciousness has not processed the information hidden in the subconscious and unconscious, the super-consciousness remains inaccessible and our darkness does not receive light. We are in contact with the atmosphere of both worlds. On the one hand the light that reaches out to us, on the other hand the darkness that resents and rejects the impregnation of the divine. Symbolically, it is the paradox of the mystery of the creation of the world: how to make use of evil to bring about good !

Works and/or Lectures by O. M. Aïvanhov on the subject treated

Excerpts from Lectures (audio and/or video) by Omraam Mikhaël Aïvanhov

Reader's note: the writing of this entry is temporary and limited to only a starting point, since the topic is more deeply examined by Omraam Mikhael Aïvanhov in the context of thousands of lectures he held between 1937 and 1986. The researcher will find important aspects of further interest by reading or listening directly to his lectures, published by the Prosveta, the sole and exclusive owner of the rights to his work. Therefore, this article does not fully and comprehensively describe Omraam Mikhael Aïvanhov's thought on the subject matter.

OmraamWiki is an international project realized with the contribution of the Scientific Research funds of the University for Foreigners of Perugia (Department of Human and Social Sciences)
Retrieved from "http://en.omraamwiki.org/index.php?title=Song_V’Natchalo_Be_Slovoto&oldid=305"