Deprecated: The each() function is deprecated. This message will be suppressed on further calls in /home/customer/www/omraamwiki.org/public_html/includes/MagicWordArray.php on line 197
 Songs by Peter Deunov - OmraamWiki

« The world of music is the medium through which the soul manifests itself on Earth. Without music, without the musical environment created by the world of sounds, the soul and spirit cannot manifest »[1]

« By singing mystical, spiritual songs, we create around us a whole world of shapes and colors. And since we ourselves are our own instrument, these shapes, these colors that we create outside of us, we also create them within us, and they attract luminous entities, they attract Angels, they are food for them. By singing we open a door to Heaven through which the celestial entities pass. The harmony that we create spreads little by little and will influence all the creatures in space. »[2]

The study of the Bulgarian songs of Peter Deunov (1864-1944) represents a particularly important tool in the Teaching of Omraam Mikhaël Aïvanhov (1900-1986). 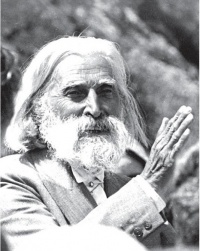 Composed in a Slavic country, the initiatic music of Peter Deunov is sometimes tinged with oriental colors and carries within it the roots of Bulgarian folklore. The spirit of Slavic folklore has the particularity of being often in contact with the life of the soul, and offers a popular poetry that is at once deep and universal.

Initiatic singing is above all a musical exercise aimed at enhancing the beauty of the human soul in its spiritual journey. Addressing primarily the feelings of the heart, it communicates to us the memory of our divine essence. However, it also addresses our thoughts, questions them about the meaning of life, helps them to recover faith and the memory of our spiritual origins. It enlightens the vision of our future and reveals to us the work to be accomplished.

Peter Deunov's songs are written in Bulgarian. Bulgarian is a language close to Sanskrit [1] and being one of the oldest languages, it is considered a sacred language. The vibratory intensity of Peter Deunov's songs derives from the "exact" matching of sounds and words. Only occasionally will they be sung in another language.

A Language of Synthesis

The initiatic song is expressed in small synthetic capsules by a simple and deep musical language. This synthetic form is found in the content of the melodies which wisely combine rhythmic movements and spoken words.

A Language of the Soul

If sung by a conscious collectivity, we believe that an initiatic song has the potential to produce perfect harmony in the human soul.

In initiatic music, everything is symbolic: the words, the references to nature, to the life of the Soul, to the Divine, to man.

A Simple and Accessible Format

Despite the fact that they are written in a foreign language, anyone can sing these songs and participate in the spiritual work they offer. In his spiritual school, Omraam Mikhaël Aïvanhov wanted everyone to sing, even those who felt they could not sing.

A Mode of Expression that Contrasts and Polarizes

One of the important characteristics of initiatic singing is the frequent use of contrasting rhythms, alternating different tempos and combining different moods over a short period of time.

A Potential for Action

Like prayer, singing within a group songs composed by a spiritual Master can have an impact on the vibratory rate of matter and the environment.

Choral Singing in the Spiritual Teaching of Omraam Mikhaël Aïvanhov 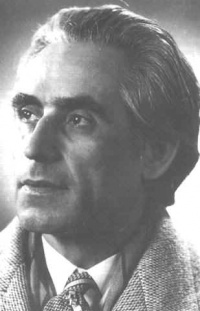 Omraam Mikhaël Aïvanhov (around the 50)

An impersonal and inclusive activity

In 1937, Omraam Mikhaël Aïvanhov was commissioned by Peter Deunov to bring the teaching of the Great Universal White Brotherhood to Europe and especially to France. He transmitted this teaching orally in order to speak primarily the mental level of the disciple and used the songs of Peter Deunov to speak more to his heart. Choral singing is a spiritual method which he used to help people to unite in an impersonal way. Singing beneficially influences the energetic environment and develops subtle spiritual communication between singers.

Structural Conception of the Songs: A Main Melody Harmonized in Four Voices

The songs feature a main melody by Peter Deunov, which was subsequently harmonized for the choir in four mixed voices by various musicians. Learning the main melody is the basic work of the disciples. In addition to singing a beautiful melody, the work mixing four voices invites choir members to work consciously to merge their individual lives into the collective.

« Four-part choral singing is an act of great significance. In the first place, it is a symbol of what we have to do to attune ourselves and harmonize with each other. The blending of voices over our heads is, at the same time, a blending of our souls and spirits. Secondly, choral singing is an expression of our desire to embrace the universe, to be attuned to it and in harmony with the whole. This is why, before you begin to sing, you should turn your attention inwards for a moment to still any agitation and put aside the concerns of everyday life so as to be in harmony with all creatures in the cosmos and capable of singing in unison with them. »[4]

List of Songs used in the Teaching of Omraam Mikhaël Aïvanhov

Works and/or Lectures by O.M. Aïvanhov on the treated subject

Excerpts from Lectures (Audio and/or Video) by Omraam Mikhaël Aïvanhov

Reader's notes : the writing of this entry is temporary and limited to only a starting point, since the topic is examined by Omraam Mikhael Aïvanhov in the contest of thousands of conferences he held between 1938 and 1985. The researcher will find important aspects of further interest by reading or listening directly to his lectures, published by the publisher Prosveta, the sole and exclusive owner of the rights to his work. Therefore, this artcile does not fully and comprehensively describe Aïvanhov's thought on the subject matter.

OmraamWiki is an international project realized with the contribution of the Scientific Research funds of the University for Foreigners of Perugia (Department of Human and Social Sciences)]
Retrieved from "http://en.omraamwiki.org/index.php?title=Songs_by_Peter_Deunov&oldid=354"